What is Montessori Education?

Simply put, Montessori is a highly effective, child-centered, humanistic method of educating everyone from infants to adults. It has produced geniuses and been the preferred educational method of royalty, yet it has also been successfully applied to persons with special needs and disabilities including dementia. In the United States of America it is the most popular private school educational technique, yet it remains poorly understood.

Renaissance offers two free documents that you may find helpful

Discovered more than 100 years ago by Dr. Maria Montessori, the Montessori method was the result of scientific observation and trial and error. Proven by formal, longitudinal studies to have a more effective outcome than other techniques, it is nevertheless grounded deeply in social justice and respect for children. 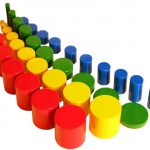 Because of the internationally recognized name, many people worldwide assume that Montessori  schools are part of a franchise, chain, or are centrally licensed. In reality, each school is  independent, resulting in a wide range of quality. Better schools are associated with one of the large    international bodies. Renaissance Montessori is affiliated with the International Montessori Council.

Twelve Points of the Montessori Method

From The Montessori Revolution in Education by E. M. Standing.

1. It is based on years of patient observation of child nature.

2. It has proved itself of universal application. Within a single generation it has been tried with complete success with children of almost every civilized nation. race, color, climate, nationality, social rank, type of civilization — all these make no difference to its successful application.

3. It has revealed the small child as a lover of work, intellectual work, spontaneously chosen and carried out with profound joy.

4. It is based on the child’s imperious need to learn by doing. At each stage in the child’s mental growth, corresponding occupations are provided by means of which s/he develops his/her faculties

5. While it offers the child a maximum of spontaneity, it nevertheless enables her/him to reach the same, or even a higher, level of scholastic attainment as under the old systems.

6. Though it does aways with the necessity of coercion by the means of rewards and punishments, it achieves a higher discipline that formerly. It is an active discipline which originates within the child and it is not imposed from without.

7. It is based on a profound respect for the child’s personality and removes from him the preponderating influence of the adult, thus leaving him/her room to grow in biological independence. Hence the child is allowed a large measure of liberty (not license) which forms the basis of real discipline.

8. It enables the teacher to deal with each child individually in each subject, and thus guide him/her according to his/her individual requirements.

9. Each child works at his/her own pace. Hence the quick child is not held back by the slow, or is the latter, in trying to keep up with the former, obliged to flounder along hopelessly out of his depth. Each stone in the mental edifice is “well and truly laid” before the next is added.

10. It does away with the competitive spirit and its train of baneful results. More than this, at every turn it presents endless opportunities among the children for mutual help — which is joyfully given and gratefully received.

11. Since the child works from his/her own free choice, without competition and coercion, s/he is freed from danger of overstrain, feelings of inferiority, and other experiences which are apt to be the unconscious cause of profound mental disturbances in later life.

12. Finally, the Montessori method develops the whole personality of the child, not merely his/her intellectual faculties but also his/her powers of deliberation, initiative and independent choice , with their emotional complements. By living as a free member of a real social community, the child is trained in those fundamental social qualities which form the basis of good citizenship.

The founders of Google credit Montessori for their success.

Tim Seldin, the founder of the Montessori Foundation, sits on Renaissance Montessori’s Advisory Board.
Here he provides a brief introduction to Montessori education.

In the video below, Tim Seldin discusses what children receive from a Montessori education.

We are accepting applications for the 2020-2021 school year. Learn more

Staying Safe in the Age of COVID-19

As NC counties have begun to allow schools to reopen for in-person instruction, many of our schools are in the process of welcoming kindergarten students back to campus, with stringent health and safety protocols in place. Prospective families are invited to schedule a tour and learn more.

A Bilingual Arts and Sciences Montessori Preschool In Cary, NC